Why we need to learn ORACLE RAC 11g

Table of Contents Debug RMAN 04006 Error Why we need to learn ORACLE RAC11g? Overview of Oracle RAC What is High availability and scalability? Basic components of a cluster What is Clusterware software?

1.Let us we discuss what is purpose we have to learn Oracle RAC11g?

*The most people are reading this blog the who is already oracle dba or they are trying to become an oracle dbathe person who is started his career at Linux administrator or he had a good knowledge of Linux than he stepped into oracle dba (most of them knows what is oracle dba and what they are doing we are not discussing about entire thing but we will focus outline ).

*It classified into two types

* the one who works on inside the SQLPLUS i.e user data, cloning database, create database or table/index /schema refresh/copying one into another DB

*The guy one who has 4 years experience what is next? their next preferences to learn Oracle RAC, before we are going to know about ORACLE RAC we would see the architecture of standalone and ORACLE RAC? 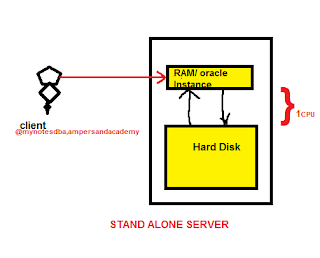 *In case our HDD got an issue or failure we can lose the data even if we have a backup also we would miss the current working data and moreover we need to again install os, software so the traditional days we would follow the method of "Redundancy"

What is the redundancy? 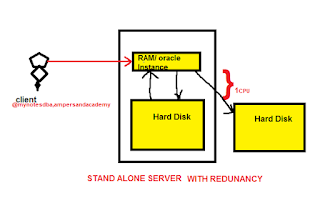 *Each data has been written to hard disk, at the same time data has copied into another base so the data won't lose at all

*Basically we dba what will think of the problem of above actually, the dataguard provide give assurance for 100% without data loss but its only for committed redo logs not for archive logs which is resides on RAM. 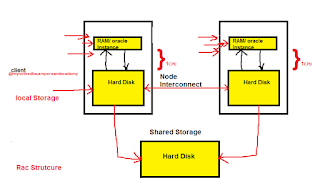 *In this pic the client-server are interconnected the data which was committed data are maintained in shared storage so the client will access data from shared storage i.e now data has been independent 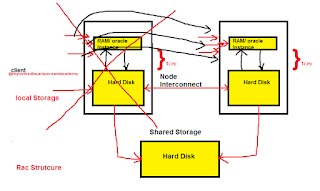 *The Oracle RAC Is a solution for server failure

The Benefits of learning RAC we will learn some new things also: